How do I ask a good "ID My Bike" question?

When asking an "ID My Bike" question what information about the bike should I include?

Would a good "ID My Bike" question need all of the following or are there a few key things that would offer the best chance of an ID? Maybe something like - if these three things are included the chance of ID is 50/50. If these two things are added to that the chance goes up to 80%

Pictures (maybe some coaching on how to take good pictures)

Having seen a great many id-my-bike questions on this site I think the goal is not so much getting the bike identified but avoiding looking like an idiot, collecting sarcastic comments and getting your question closed as a duplicate of Why shouldn't I care what model/make/year my bicycle is? within 20 minutes.

An absolute necessity is well lit, high resolution, straight-on photo of the whole bike, right way up, from the drive side, with an uncluttered background.

Include the year of sale when new if you know it (or a guess).

Any other info or photos you can provide won't hurt, but don't raise the probability of an identification much it seems.

A piece of info that is generally left out that I think might help in some cases is the country or location where the bike is.

Including the serial number generally won't help. Collectors have made databases of numbers of a few collectable brands, and sometimes someone will be able to decode a numbering scheme, but in general they are meaningless as manufacturers don't provide a serial number lookup that will provide model or component configuration to the public.

In order to ID a bike a question must have:

At least one clear picture.
If there is no picture there is zero chance of providing an ID. The question will be closed.

In the picture the bike should be:
- well lit - right side up (sitting on it's wheels)
- of the whole bike
- from the chain side of the bike flat on.

Other helpful information:
- Country in which the bike is located.
- What has already learned or is known about the bike.

Here is an example of a good picture. 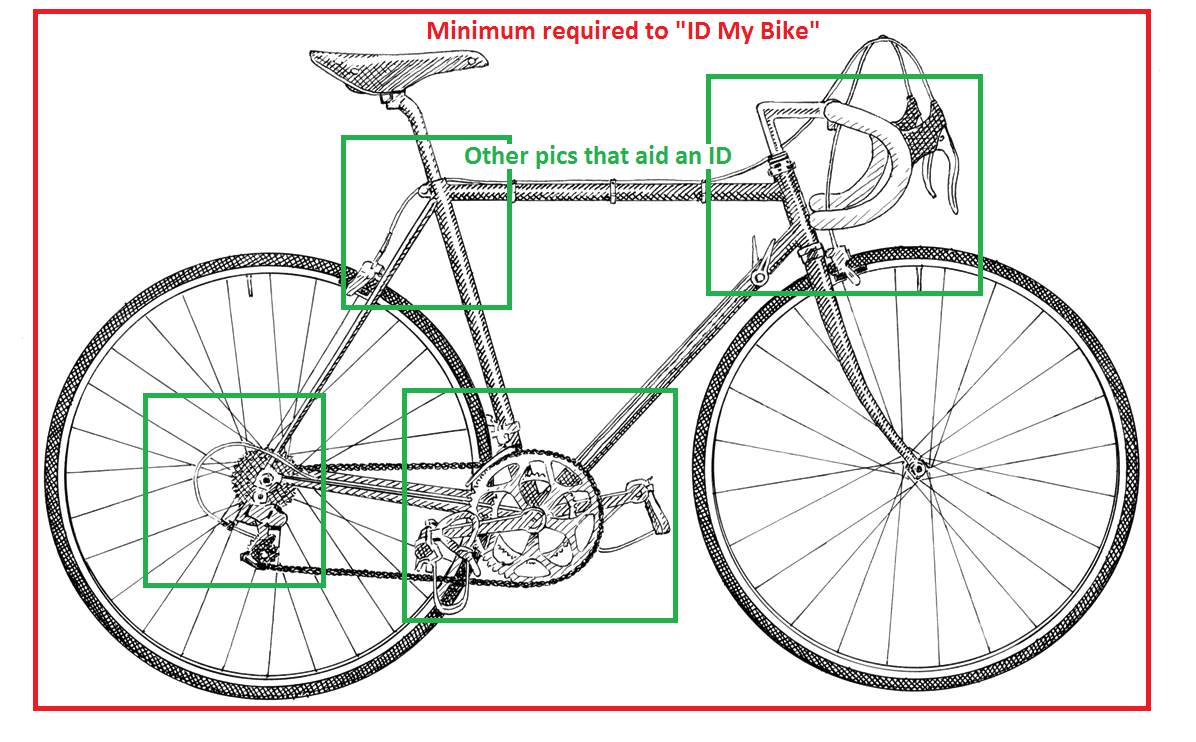 a. the first photo should be a clear and well lit shot of the right-hand side of the bike. Ideally it should be sunlit or good incandescent or LED lighting. Avoid fluorescent tube lighting at all costs.

b. the bike should be clean-ish. Doesn't have to be concours level but we need to see the details and small features.

c. Show the whole bike, not just the frame.

d. high resolution - let us zoom in. The SE limit is 2 Mbytes on an uploaded photo. If that's not enough, upload your photo directly to http://Imgur.com/ and share the link.

e. Right-way up! Don't send in photos of the bike lying in a heap - try and get a view point that equates to about 2~3 metres from the bike, equidistant between wheel axles, and at a height somewhere even with the saddle or top tube.

Here's a workable photo - a plain background would have helped. 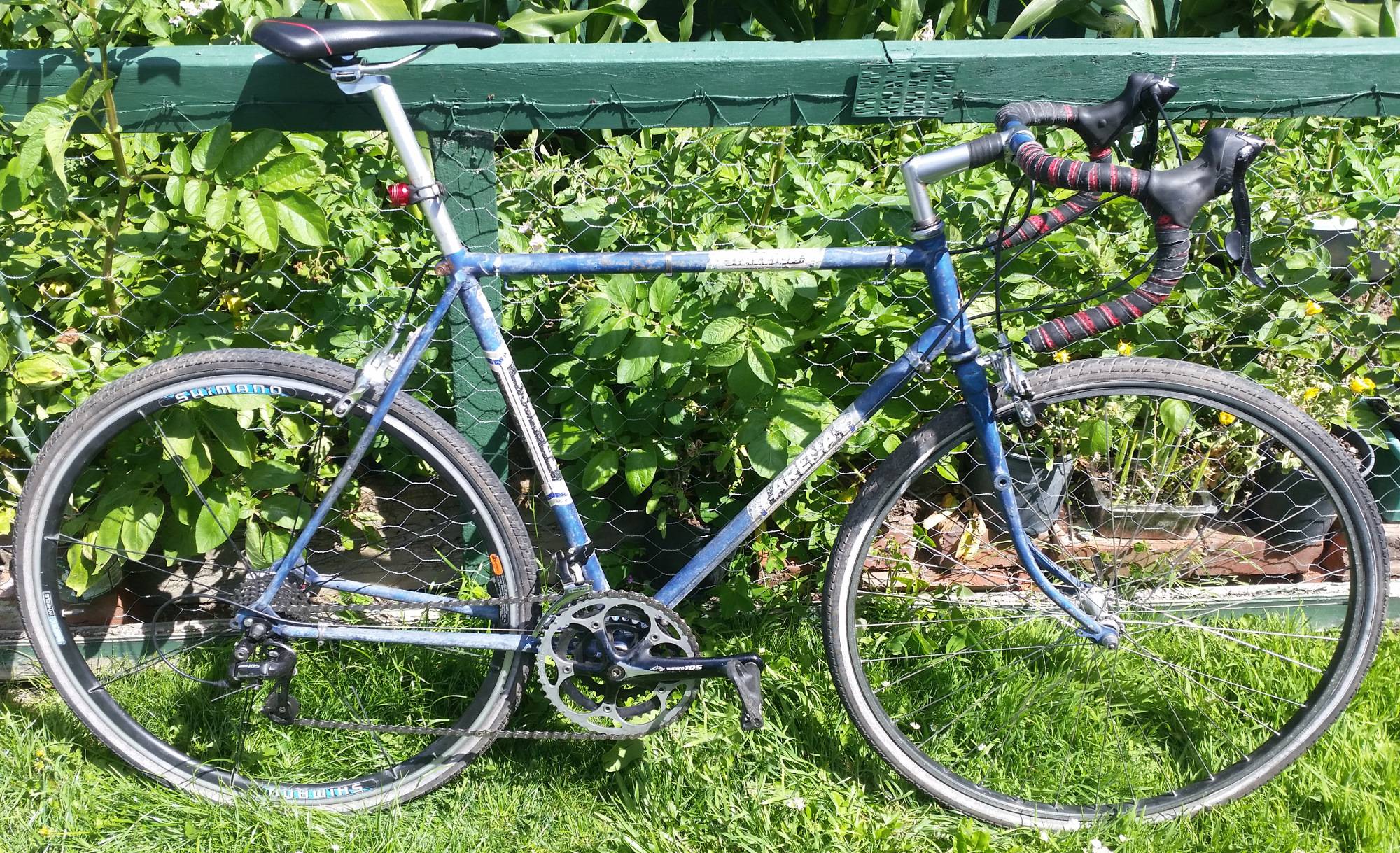 You can read off that its a shimano 105 groupset with dual pivot rim brakes and brifters, so the mechanicals are decades newer than the frame.

Another good photo from a successful ID question at Identify old bicycle w/locking steering column? Yes its inside, but the image is clear and well lit. 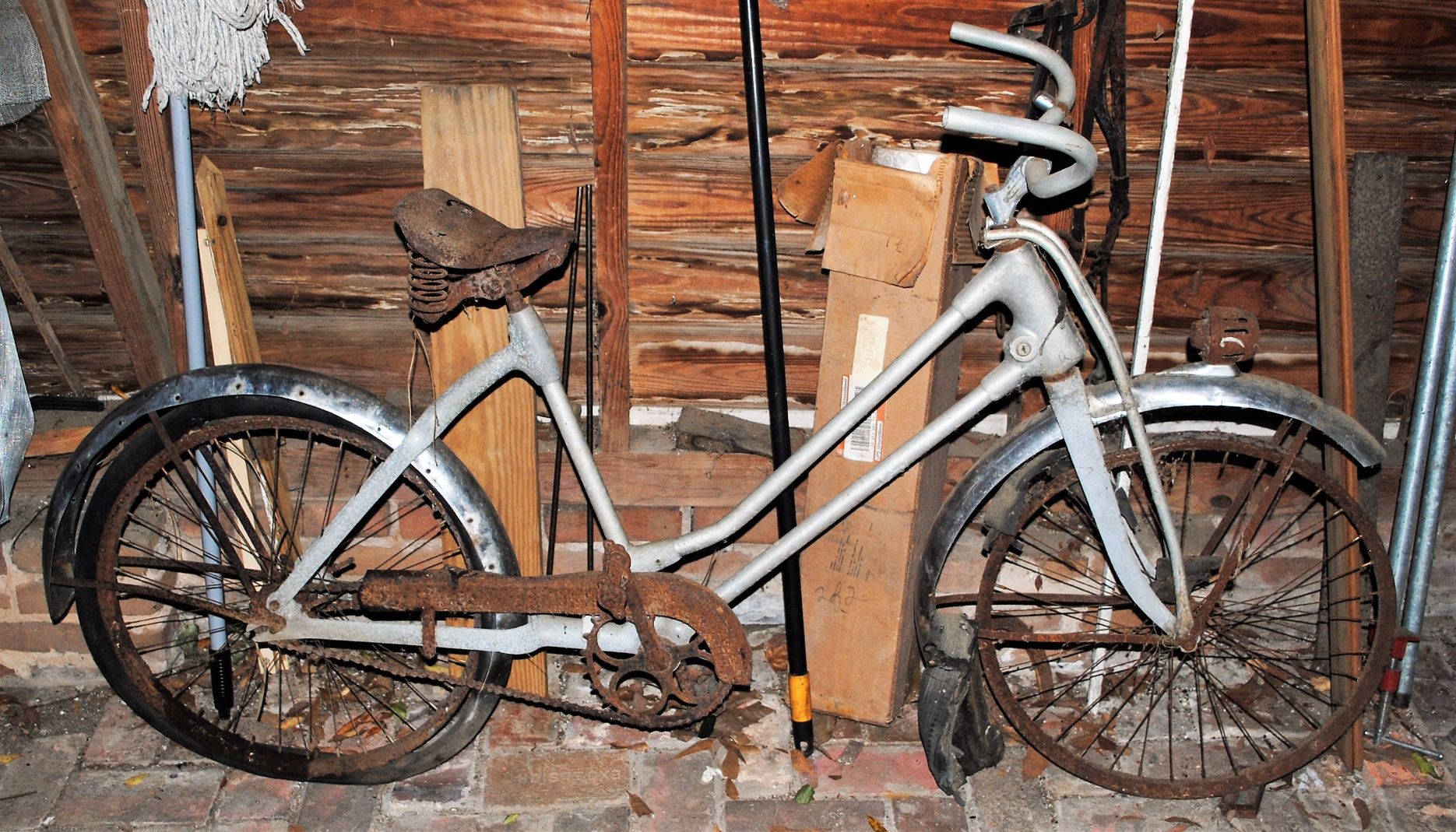 Not terrible but not great photos for ID purposes: 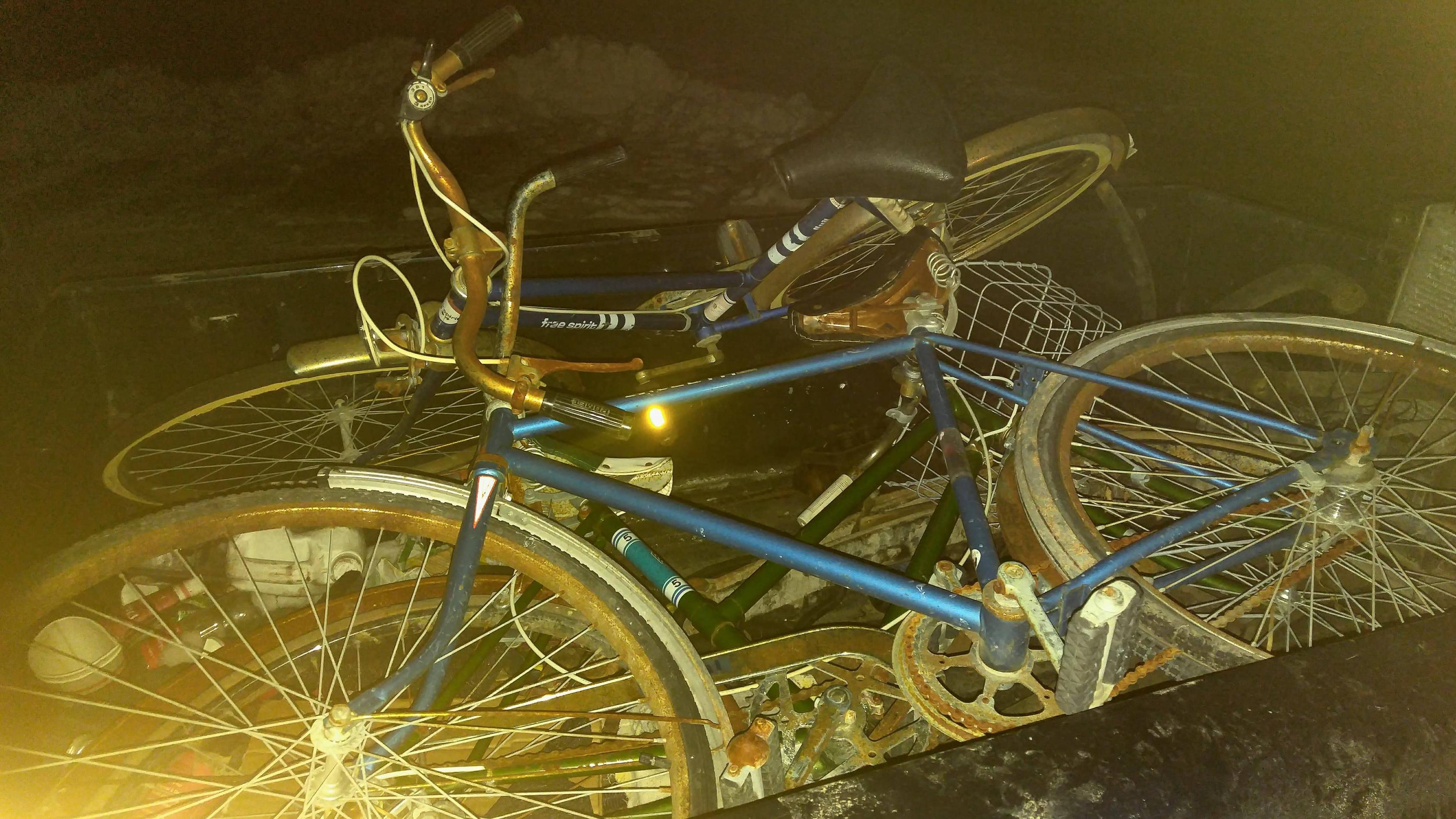 from Looking for help identifying my newest addition 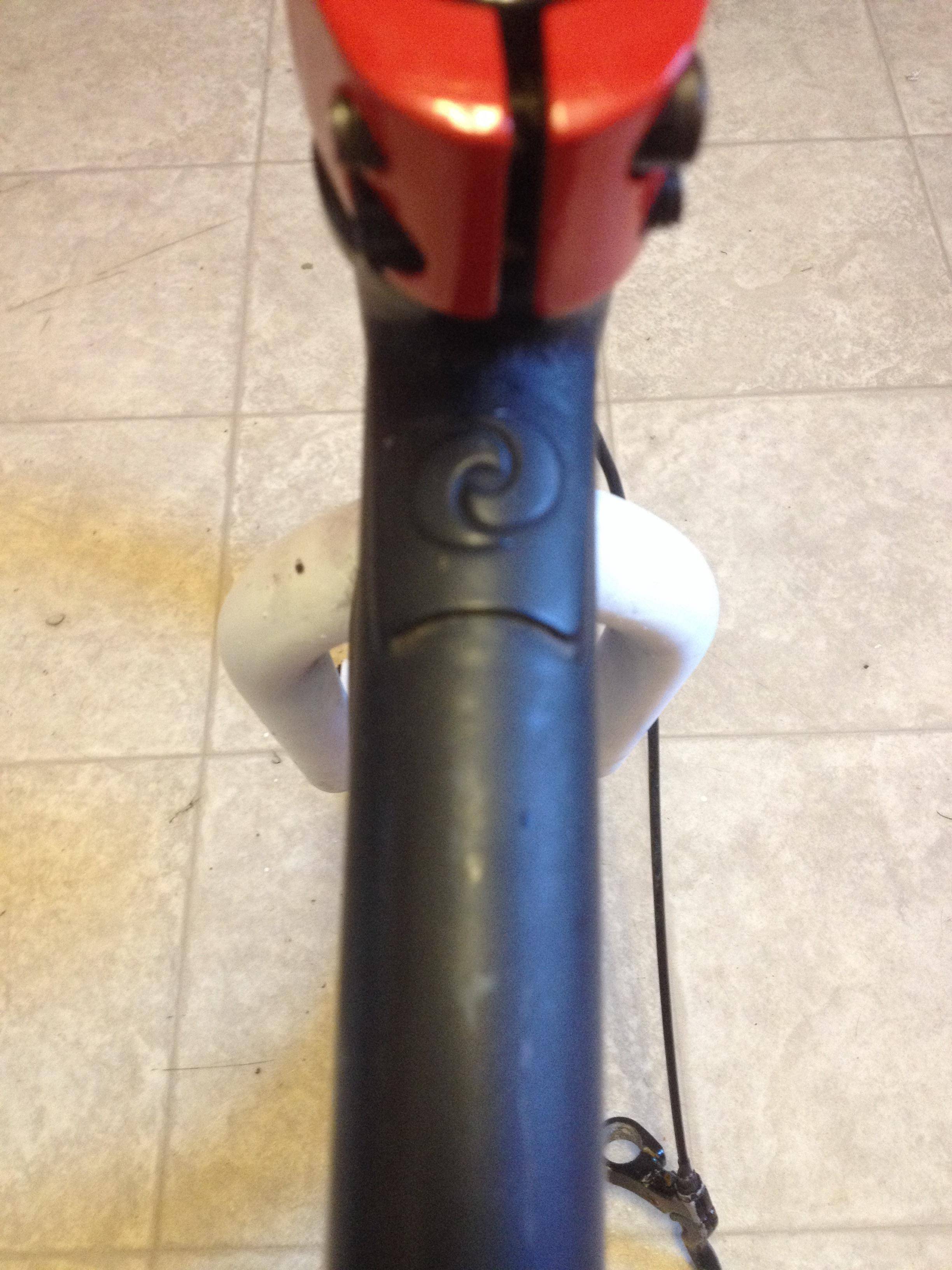 from What kind of bike is this? Can anyone tell by the logo?

Subsequent photos should zoom in on points of interest - what about this bike might be unique enough to promote recognition? Standard things would include

This question has some great examples of closeups on useful areas, but even so still remains without a confirmed identification. Name that frame! (Likely Japanese, likely made in 1986, with known serial number, likely a Bianchi)

Component close ups might help with dating, but often the components are used on many different bikes from different assemblers, and they can be changed after purchase. So a bike with "Shimano" on it is not a lot of help.

This answer emphasizes a few things in other answers for clarity. In general, we ask for clear photographs of the entire bike, and preferably some close ups of select parts as well. Be aware that these are usually necessary but not sufficient to ID a manufacturer, model, and year. Identifying a manufacturer is easier, identifying model and year is harder.

Bicycle companies typically rely on decals, usually on the down tube at minimum, and head tube badges for branding. If you have those in the photo, you usually know who the bicycle manufacturer is. Of course, if those items are present, then the OP usually has the information to identify the manufacturer already. Nevertheless, not all head badges state the manufacturer clearly, but they can be recognized by enthusiasts. One example is Giant Bicycles' head tube badge. Naturally, some bicycles have had their decals and/or head badges removed.

Failing that, with steel bikes, the design of the frame lugs and fork crown lugs can sometimes be informative, although not all frames use lugged construction. Some other design elements on bikes in general can be distinctive, which is why Criggie mentioned things like unusual-looking dropouts, sometimes the seat cluster. As another example, some Colnago steel bicycles (e.g. Master and Master X-Lite) used star-shaped down tubes on the argument that they had higher torsional rigidity, and I don't believe anyone else used these. I think that these unusual design elements are more rare, however.

Identifying the model and manufacturing year of the bicycle can be harder. Sometimes, enthusiasts can match a paint scheme to a catalog, thus providing model and year - if someone posted a scanned catalog online, or if they collect catalogs, or if there's an example of the bike online, e.g. on Bicycle Blue Book (but that tends to cover more modern bikes). We can make guesses if we recognize the components or other frame features. For example, in the first photo Criggie posted, the components look like 9-speed Shimano 105, which was current in the early 2000s. The bike has a quill stem, rather than a threadless headset and stem, and these were less common on early 2000s bikes. So, it's possible the bike is from around the early 2000s, but it's also possible the components were refitted and the bike was from the 1990s.

It's been stated elsewhere, but the serial number is usually not helpful at all. Presenting the serial number alone is worthless, and it is quite possible that the question will get downvoted and maybe closed.

Not the answer you're looking for? Browse other questions tagged discussion identify-this-bike .

21
Are "identify my bike" postings on topic here?
3
Can we have close reason for serial number id-this-bike questions?

1
How to ask a good subjective question
3
What's happening!? (Campaigns in the works & Ideas that need work)
1
Local Bike Shop (LBS) "Stack Artifact"
2
Should personal tone/references be avoided in our community?
7
What (type of) bike should I buy?
10
Let's Build an Active Chatroom for the Betterment of the Community
0
Can this question about how to construct/affix a bike light be reopened?
3
Can we have close reason for serial number id-this-bike questions?